April 30, 2015
Ok, this is going to make me sound like the world's worst beauty blogger but I have a confession to make, and it's going to be met with a choir of "are you serious?" but it's something that I need to get off my chest with the promise of rectifying here and now...

I have NEVER had a skincare routine!

*Runs away and hides*

Apart from taking off my make up with make up wipes and the odd going over with the Garnier Micellar Water, I've never touched a skincare product, I've never even thought about it. Half the time it's because I'm too lazy at night to do anything after taking my make up off, or in the morning I don't have time to do anything before putting it on, but mainly because I have oily skin, I've always thought it would make it worse and as it's quite sensitive and tea tree (which I'm allergic too) pops up in everything, I've never bothered. I've never had particularly bad skin so I've never really thought anything of it until I've seen all the recent new launches from No7 at work and been desperate to learn more and try new things.

I'll put it out there now, most of the items I use are No7 purely as I work for Boots so can get tips from the girls, and we also get to test them and bag samples when they're launched to see what we like best but there's a few bits and pieces in there. Plus with the great No7 Vouchers, it's hard not to treat yourself! 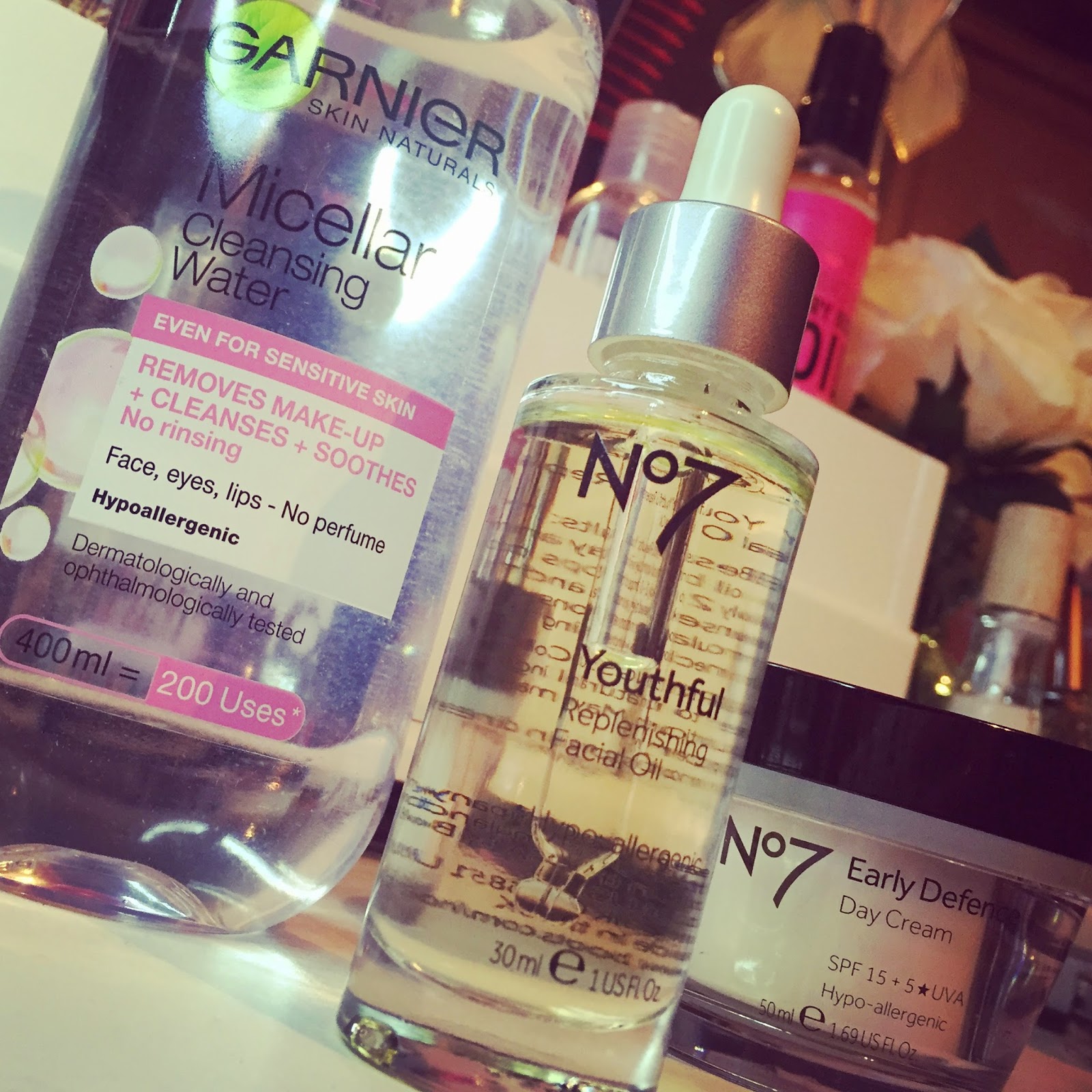 Day to day, I normally go to the gym after work so this is where I take my make up off with make up wipes - generally Johnson and Johnsons or No7 depending on whats on offer. As I go to the gym in the event, 9 times out of 10 I have a shower at night rather than in the morning so in the shower I break out the No7 Beautiful Skin Purifying Exfoliator which is a lovely scrub. After I've got out the shower and got dressed and done my hair, this is normally when I'm ready to chill out so I take my little skincare stash into the front room and huddle under a blanket infront of the TV with some candles lit. I start with the Garnier Micellar water which I just put on some plain Boots cotton wool pads and use all over my face, particularly around my eyes, nose and chin where I sometimes find make up hasn't come off properly if I was in a rush getting to the gym.

Next up is the new No7 Youthful Replenishing Oil which I wasn't convinced about at first considering my skin is already oily but after being told the more I use it the less oil my skin will produce, I brought it and have been giving it ago the last couple of weeks. I love the feel of it and it's lovely to massage into the skin and a lot goes along way so despite it being £23 (which, tbh, is quite cheap I found for skincare), it'll last for a long time. To finish up in the evenings, I've been using the new No7 Early Defence cream - I've actually been using the Day cream as I picked up the wrong one on accident but I can't see that it matters that much when I use it. The cream smells heavenly with the cucumber scent and is easily absorbed and leaves my skin feeling so soft and looking hydrated!

(Won't go into details about my Morning skincare routine as that's not up and running yet other than a bit of the No7 cream on before I start my Make up!)

So I admit, I was silly and wrong to have never started a skincare routine but at the age of 23, I think I've probably got in there just in the nick of time and it's definitely something I'm going to keep going!

Would love to read other posts about your skincare routines for tips and ideas so please Tweet them over to me! xox