June 24, 2015
I've never in my life been a Primer person/user until about a year ago when I got a cheap Seventeen on from Boots and even then, I didn't religiously use it. However after going to a Smashbox Bloggers event earlier in the year, the Smashbox Photo Finish Foundation Primer changed my life - big statement alert! Since then I've managed to bag a few cheap samples from work so I thought I'd go through the ones that I use and how/when I use them :) 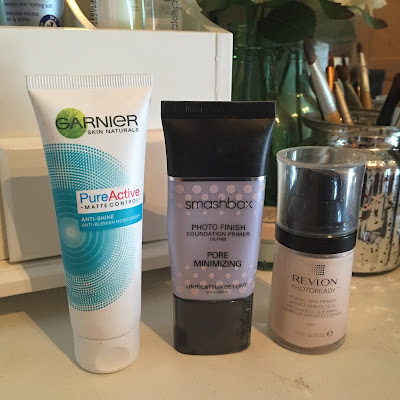 The Smashbox primer is quite pricey and because I use more of it than is probably needed each time, I only use it on special occasions and when we're going out. This literally as I said, a life changer. It's the first time in the 10 years I've been wearing make up where I've not had to plaster my oily skinned face with powder after foundation and can quite happily go out with just a little setting powder on the t-zone and chin! It has a mousse like texture and is so super smooth to apply and leaves skin looking matte before you put the foundation on. This is definitely my absolute favourite Primer and if it was a little cheaper, it's probably the only one I would've used.
The Garnier Skin Pure Active Matte Control Anti Shine/Anti Blemish Primer is a new one that I've tried this week. I got a sample at work and as I'm having a bad skin week, I thought I'd give it ago. I must admit that despite the primer being of a runny gel consistency which I really had to massage in (and even then my skin was still looking really shiny), the make up went on easier than it does on top of any other primer. It didn't look patchy or streaky and I barely spent any time blending it in. As much as I loved the look after I'd finished my make up, the smell is really overpowering and smells like antiseptic cream and reminds me of the Witch Hazel gel and along with the runny consistency and having to put a fair amount of powder around my eyes/nose, I'll be saving this one for bad skin days!
Finally - my every day Primer; the Revlon Photo Ready. At first I really didn't like this and I used it a couple of times and I just threw it in my box of spare products that I may one day use again. But last week after leaving my make up bag in the car (and being too lazy to go and get it), I dug this out. The creamy texture is nice but like the Garnier primer, it does leave skin feeling oily and it can take some time to blend out foundation. As soon as it's on though it stays in place however again, powder is required in more places on my face than I'd like! But at the end of the day, my make up is generally still looking good and the foundation is still in place betime I finish work and even been to the gym so this is great as a cheap every day Primer. 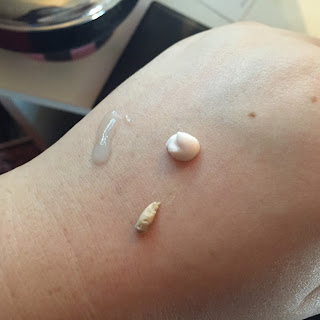 (Top left, Garnier. Top right, Revlon. Bottom, Smashbox)
I'll probably be taking the Smashbox primer on holiday as I've purchased a new one especially but let me know what Primer's you use if you have oily skin. May need to try more to add to the collection :)
Twitter
Instagram
Bloglovin
beauty