June 30, 2016
Ok so yes, our Enagement party was like a month ago but it's been a busy few weeks so I thought I'd do a little post while I have an evening to blog!

Our Engagement Party (other than feeling like a life time ago) was amazing - it was the best day with our family and friends and was the perfect opportunity for our families to meet for the first time as well as my beautiful bridesmaids to meet each other too.

I think Nick has finally realised what he let himself into when parcel started arriving and DIY stuff from the Range started piling up - if I go this cray cray over an engagement party, imagine how mad I'll be going mad making stuff and organising the wedding? I KNOW!

Picking a Venue
As for the location itself, picking a venue was actually tricker than I expected - I wanted the pub where we met as they have a Function Room and some of Nick's friends work there as it's his old pub but to start with he didn't and wanted to go elsewhere.. We looked at a few other local pubs with a function room but 1 was too expensive and 1 didn't have a car park so in the end we went back to Plan A.. I have a feeling that over the next 2 years, I may be getting my way more than he knows ;) Little things like having a car park and being close to a hotel are so important when you have old folk coming or if people are travelling to be with you!

Ebay Buys
My favourite buys from eBay were this super Cute vintage bunting which alternates with "Happy Engagement" and "Sarah and Nick".. However, no where on eBay did it say it was self assemble... just picture me and Nick with 5 metres of string and over 100 triangles.. it's safe to say the party was nearly not needed and the alcohol was out! We had bunting pretty much the whole way around the room. This was £12.99.

As well as balloons which we had on each table, from eBay I also got a personalised "Welcome to our Engagement Party" poster which we stuck on the door of the function room at the pub. This was £6.99. 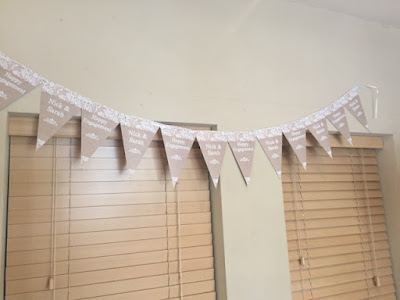 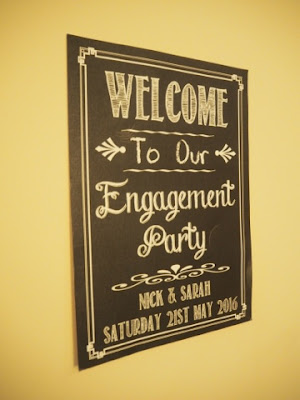 DIY Crafts from The Range
I saw on Pintrest a few ideas that I knew I just had to do so I went to the Range down the road and had a mooch around the craft isles and after spending over an hour (no joke!) deciding what to buy and what to make, I made Name Badges with everyone's names and their relationship to us - these were so handy on the day as everyone was looking who everyone was as a lot of people hadn't met before. This was one of the things I'm most glad I did for the day.

I also stole another idea from Pintrest to show off my Bridesmaids using just a cork board, cardboard, lace and a whole load of photos. Everyone was having a nose and it was great to show how I knew each of them. The school photos were a particular hit!

I probably spent about £20 in the range on everything which I was really impressed with although I must've spent a good couple of hours a few times over the space of a couple of weeks making everything. Was totally worth it though and I'm so glad I did both as they're also something to keep and already show the vintage theme we're going for. 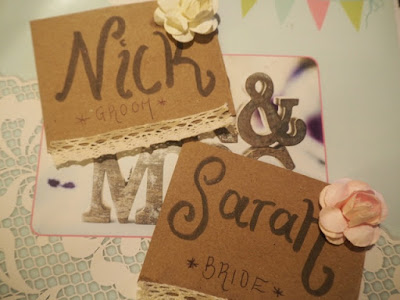 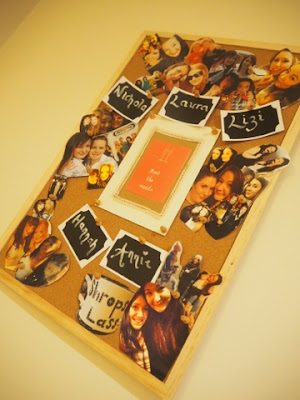 Etsy Buys
To make the day extra special, we wanted a little something for our Bridesmaids and Nick's Best Man to ask them and wanted to make everything personalised so I got these cute personalised hearts for £4.99 each as well as the Best Man beer tag for £3.99 from Easy. It's something they'll be able to keep and look back on. 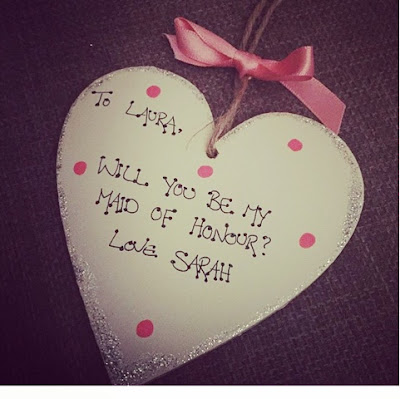 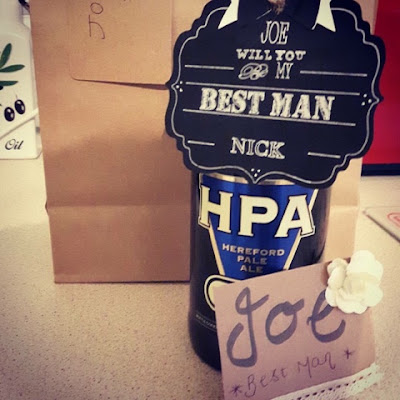 We had the best engagement party and I'm so glad I made the amount of effort I did and spent the time and money that I did in the run up as we'll only ever do this once and I wanted to make it as special as possible not only for us, but for our family and friends too. 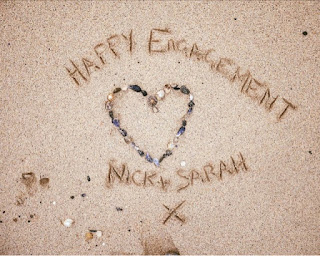 PS - thank you to my Beautiful Bridesmaid, Annie (check out her blog here) for posting this little message from Cornwall on the day of our Party! xox