January 13, 2016
So the other night when I was talking about my blog, my OH, Nick, was rather upset that I don't really include him other than little mentions here or there on here so I found a Boyfriend Tag for blogposts on Pinterest and it's sure to say that it kept us amused for a good hour. So we're sat here with Paddy the piggie sat in-between us, reminiscing about the last couple of years... here's how well (or not!) Nick knows me!

1) Where did we meet?
N: At the Cornmill.
S: Where you were an assistant manager who dealt with my complaint when someone put sour cream on my pudding instead of whipped cream.

2) Where was our first date?
N: At the Village hotel.
S: I was bored and boxing was on.

3) What were your first impressions of me?
Smiley and friendly. You had a nice smile and that does it for me. (To Paddy: Doesn't Mummy have a lovely smile). Positive Person.

5) Do I have any weird obsessions and if yes, what?
Plastic bags. Candles - obviously. Don't think that's weird though, plastic bags is - one day the world will run out but we'll be ok.

6) How long have we been together?
N: Facebook official was the March - I can't remember the date I'll be honest. About 22 months.
S: Met August bank holiday. First date was November 23rd, Facebook Official was March 9th. Just sayin'.

7) Do we have a tradition?
N: Yeah probably have a few already but can't think what they are. I just get the feeling we do. Little traditions like having dinner at the table now, and always watching an episode of something in bed.
S: We always go away for both of our birthday's.

8) What was our first Road Trip?
N: Don't know.
S: Before we were Facebook Official we went to Birmingham for a weekend, we stayed in the Malmaison and had dinner at the MailBox after going to the Champagne Bar.
N: Oh and drinks in that dodgy Whetherspoons. 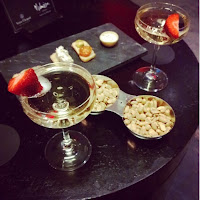 10) What is my favourite restaurant?
You talk about Marco Pierre White a lot, and you've always liked Amores but we've never been - need to do that one day for the steak.

13) If I'm watching TV, what am I watching?
On your own, sometimes Miranda's on. Or Big Bang Theory. Or Youtube! SacconeJoly's or whatever they're called.

14) What is the main food I don't like?
There's loads *laughs*. Suppose something you really don't like... white chocolate, I found that out by buying you a white chocolate easter egg. You don't like coffee. Chorizo which is one of my favourite foods. Anything spicy I suppose.

15) What drink do I order when I go out?
Rose and Lemonade. But if not it'll be a blackcurrant if you're not drinking.

17) What's my favourite sandwich?
N: Would it be tuna mayo?
S: If Panini's count then yeah, tuna melt!

18) What's a talent that I have?
A talent for being right.. *laughs*. Make up/stylist I suppose, it's what your job is.

19) What would I eat every day if I could?
N: You drink fruit tea. You wouldn't eat chocolate as you don't really like it hat much.. Tuna cheese and sweet corn panini?
S: I don't think there'd be something I'd want to eat every day - I'd get bored.

20) What is my favourite cereal?
N: That changes, you've just brought Weetabix. Healthy cereal.
S: I don't often eat cereal but either Weetabix or something for kids like Coco Pops or Golden Nuggets!

21) What is my favourite music?
Pop Music. Not really got a specific taste - whatever's on the radio.

22) What is my favourite sports team?
Nottingham Panthers Ice Hockey.

23) What is my eye colour?
Ain't got a clue. They're not blue. I don't know. *Sarah looks at Nick* They're not really any colour.

25) What is something you do that I wish you didn't?
N: Work so much.
S: Tbh, you could've had multiple answers ;)

26) Where am I from?
N: Nottingham.
S: Waaah wrong.
N: Oh yeah, somewhere down South where your Nan lives.
S: Biggleswade.
N: That's it.

27) What kind of cake would you bake me on my birthday?
N: I wouldn't make you a cake, I'd bake you an Apple Crumble but if I had to bake you a cake it's be a Red Velvet as that's one of my favourite memories - you made me one.
S: N'aww yeah, with Red Haribo hearts on! 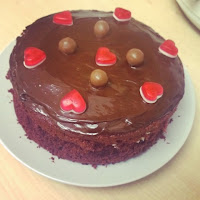 29) What makes me the happiest?
N: Meeee. No, probably the guinea pigs. Or Shepard's pie. (To Paddy.. "ain't that right Pad, you make Mummy happy").
S: No definitely you, Paddy and the little'ens, chilling out, date days/nights, being back at home with the family!

30) If I could live anywhere, where would it be?
N: Probably on a beach. Don't think it would matter where to be fair. Maybe Santorini?

S: One of the first things you learnt was put me by a beach, any beach, and I'm a happy girl! 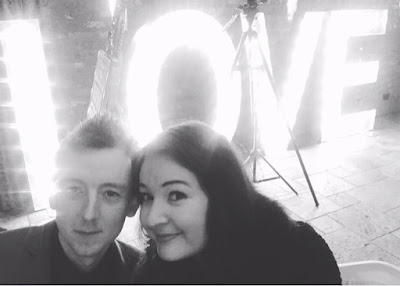